Action Cards is a recurring column here at Three Rivers Poker where I pick a film that features poker in some capacity and then specifically review the poker scenes contained therein. I occasionally tackle an honest-to-god poker movie but find it's more fun (for me and you) to discuss movies that only tangentially feature the game. Up today, a classic of 1960s cinema ...

THE PLOT: Cheerful yet aimless Lucas Jackson finds himself serving a two-year sentence in a Florida prison camp after he gets drunk one night and decides to cut the heads off some parking meters. His days are spent chopping weeds as part of a chain gang, but evenings and weekends are for poker, boxing, eating an absurd number of eggs just for the hell of it and trying not to let the man get you down. But the man can be persistent ... 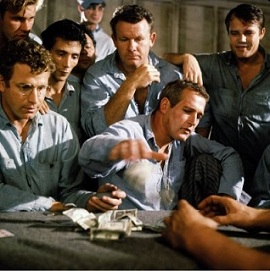 HOW MUCH POKER IS INVOLVED?: Basically just one scene, though we do catch another quick glimpse of the regular prison game early on in the movie.

BREAKING DOWN THE ACTION: Cool Hand Luke's poker scene is fairly short but deserves inclusion here for the importance it plays in the framework of this universally accepted classic. The entire scene is comprised of a single hand of standard five-card stud (one card down, four up) and kicks off with third-street being dealt to five players, including Paul Newman's Lucas (or Luke for short) and fellow prisoner Koko (played by Lou Antonio). With a pair of sevens showing -- or "Savannahs," as Gambler, who's dealing, calls them -- Koko leads out for a "cuter," which I'm fairly certain is a quarter. One player folds and Gambler calls before Luke brings out his prison roll and, with K-3 showing, raises it up a buck. Judging by the reaction of the crowd gathered around, a dollar is big money in the Florida Penal Poker Tour circa the late '40s, when the film is set. (Factoring in inflation, $1 in that time period would be worth about $9 today.)

Blind Dick calls from behind Luke, using up his "one time" in the process. Koko and Gambler also call, although Gambler remarks that he's only calling to "catch." I guess he comes by his nickname honestly. Fourth-street arrives and doesn't appear to help anyone. As the concept of "checking to the raiser" had yet to reach this particular prison camp, Koko bets a quarter again. Gambler calls despite the fact that Luke is sitting behind him and fourth-street only brought his big ace a "slop in the face." Luke again raises a dollar on top. Blind Dick folds, and the action is back on Koko.

Clearly the "one player to a hand rule" isn't enforced in prison games, and thank goodness, 'cause if it was, we wouldn't be treated to this little bit of greatness between Koko and George Kennedy's Dragline, who's standing behind him and watching the game:

DRAGLINE
What you got?

DRAGLINE
I can see that, mullethead. What you got in the hole?

Koko shows him his hole card.

DRAGLINE
He ain't got nothing showing. Raise his head off.

KOKO
He's been betting his head since --

DRAGLINE
All right, then you just call him.

Strong advice from Dragline! He and Koko clearly suspect that Luke may not have the cards to back up his raises, but there's no sense in letting the pot spiral completely out of control. Koko calls, and Gambler, who I could swear is played by a time-traveling Will Ferrell, finally decides his single ace isn't worth carrying on with. (File that one under: Yeah, no shit.)

The fifth and final card is dealt, giving Luke K-4-3-9 or "nothing visible," as Gambler says. (Hey, Gambler, you're out of the hand now! Just deal the fucking cards and keep your mouth shut!) Koko again leads out for a quarter with his 7-7-J-6, and I'm shocked that Dragline doesn't smack him in the back of the head for it. Luke, who either holds a pair of kings or is having the time of his life screwing with Koko, raises it up a buck for the third time. Dragline quickly convinces Koko to reraise a dollar back at him, to which Luke calmly four-bets yet another buck. Koko turns to Dragline for more guidance.

If I were Koko, my reply would be: "Why the hell not? You're the one who got me into this mess!"

Meanwhile, Gambler urges Koko to call, saying "What you gonna do, play like a coconut? You got to call him."

That seems like sound advice to me. We don't know if this game uses antes or if there was any betting at the start of the hand, but just doing the math on the betting we've seen reveals there's at least $13.25 in the pot at this point. So, Koko, who has half-suspected Luke of bluffing the entire hand, only has to call a single dollar to win more than $13, including the $4.75 he has already invested. That's an automatic call!

Still, Koko is hesitant. "I know he's got a pair of kings!" he says. Everyone in the room tries to get him to look Luke up, save for Dragline, who says, "The man's got kings. Get your tail out!"

Koko folds his hand, and in a massive breach of poker etiquette, Dragline reaches over and flips up Luke's cards: He had diddly-squat in the hole and was playing king-high! Everyone cracks up, as you do when your friends get bluffed out of their pants.

"Nothing! A handful of nothing!" Dragline exclaims. "You stupid mullethead, he beat you with nothing."

So, to recap, Dragline urged Koko to stay in the hand on fourth-street, demanded that he re-raise Luke's raise on fifth-street, then advised that he fold when Luke came back over top of him ... but it's somehow all Koko's fault that Luke bluffed him out of the hand? Jesus, could Dragline be any bigger of a dick?!

Luke, who with his bravura bit of poker-playing starts to earn the respect and admiration of his fellow prisoners, calmly collects his cash and pops a bottlecap off a drink. "Yeah, well ... sometimes nothing can be a real cool hand."

And thus Luke gets a new nickname, and the movie gets a title.

Some of the play is god-awful, but these are prisoners, after all, not card sharps. The hand is presented clearly, correctly and believably. I've never heard some of the poker slang the prisoners use, like calling sevens "savannahs" and jacks "johns." Maybe it's because it's over a half-century outdated or maybe it's because it was intended to be terminology that was invented inside the prison. Regardless, it sounds like how poker players talk.

WOULD I WANT TO PLAY IN THIS GAME?: The fellas all seem like they're having fun and the stakes are pleasantly low ... but, uh, there's the whole "I'd have to be in prison" thing. So I'll pass.
Posted by Bob Taylor

Gambler is played by Wayne Rogers, who was Trapper John for the first three seasons of the MASH tv show.

Have a question about Three Rivers Poker or want to advertise on the site? Email me.

Want to read some of my non-poker writing? Start here.